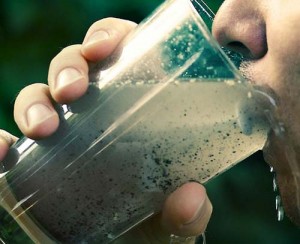 On Saturday the outgoing Democratic governor of New York State, David Paterson ordered a seven-month moratorium on some natural gas drilling in the state.

Hydraulic fracturing which is also known as fracking, involves blasting millions of gallons of chemical-laced water thousands of feet underground to crack shale and release the natural gas trapped inside it.

Its one of the biggest energy booms in the US right now.

But such is the concern that it is polluting water supplies and endangering health, that the Environmental Protection Agency is undertaking a 2 year study into the dirty downside of fracking.

But the study may come too late to save some communities.

In neighbouring Pennsylvania the shale gas revolution is gathering pace with drill rigs sprouting up across the countryside.

Already Pennsylvania environmental regulators have blamed the methane contamination of an aquifer near Dimock, on one gas company Houston-based Cabot Oil & Gas, which has been drilling into the region’s shale deposits. Cabot disputes the allegation.

But still the fracking boom continues. Energy companies are investing billions of dollars drilling for natural gas in the huge Marcellus Shale, a 400-million-year-old shale deposit that stretches under Ohio, Pennsylvania, West Virginia and New York.

As the Wall Street Journal reports today, the rigs are “dividing residents who welcome the economic boost from those who worry about the effects of development”.

And development is happening fast. This year alone, 286 shale wells have been drilled in one country alone – Bradford County, the most in any state.

Just one company, Chesapeake, has paid out $300 million in lease bonuses and royalties since 2008 in the county, out of a statewide total of $1.1 billion.

In Bradford, roughly 13,600 people, more than 20% of the county’s population, have leased mineral rights to Chesapeake.

That’s a fifth of the population in the pocket of the industry.

One resident from Bradford county, Daniel Natt, signed a lease for his property to give an energy company drilling rights.

He tells the paper. “I signed a lease but didn’t know all the info. There are so many negatives they’re not telling you about, more bad than meets the eye.”

And what they are not telling you about is the pollution.

The Journal is not the only paper to cover the fracking controversy today. USA Today picks up the story from Louisiana: “Residents here rejoiced two years ago when gas companies poked into a mammoth natural gas deposit 2 miles under their homes, sparking a modern-day gold rush.”

Residents could not believe it when they offered tens of thousands of dollars an acre to drill on their land.

And then came the down side: “Then cows started to die. Methane seeped into the drinking water. Homes were evacuated when natural gas escaped uncontrollably from a wellhead.”

“We’ve gone from getting the easiest oil and gas to the hardest,” says Gwen Lachelt, director of Earthworks Oil and Gas Accountability Project, a group advocating stricter drilling regulations. “It’s getting dirtier and dirtier.”