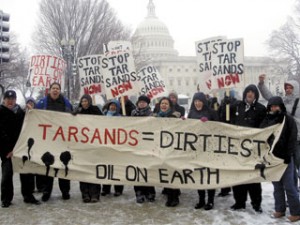 Six years ago, in preparation for George Bush’s visit to the US, leaked Diplomatic cables by Wikileaks show that the ecological cost of the dirty sands was not seen as a diplomatic issue of contention.

A message to President Bush by America’s Ambassador in Canada, noted that, in advance of Bush’s visit to Canada at the end of November 2004:

“Canada is by far the United States’ largest foreign source of energy. It is our largest supplier of petroleum, as well as our leading external source of natural gas, uranium, and electric power.”

It continued: “With Alberta’s oil sands now classified as “proven reserves,” Canada’s petroleum resources of 180 billion barrels are second only to Saudi Arabia’s.”

To an oil man like Bush this would have been music to his ears. Billions of barrels of the black stuff on his door-step, away from the hostile Middle East.

Nowhere in the dispatch is the environmental impact of the dirty tar sands even mentioned. It’s not even a blip on the diplomatic horizon.  Unparalleled reserves were there for America’s taking.

Move on six years. A new era. A new President. A first historic visit to Canada, America’s closest and oldest ally by a black President.

First up come some home truths for the new President from the American Embassy in Ottawa:

“Your enormous popularity among Canadians (an 81 pct approval rating) is to Conservative Prime Minister Stephen Harper both a blessing — because he can for the first time since taking office in 2006 gain politically from public and policy association with the U.S. President — and a curse — because no Canadian politician of any stripe is nearly as popular, respected, or inspiring as you are to Canadian voters”.

The dispatch then goes on to talk about the tar sands. “Canadians wish that more Americans would recognize that Canada is the largest source of imported energy for the U.S. (including for both oil and natural gas), although there is also keen sensitivity over the higher environmental footprint of oil from western Canada’s oil sands”.

“Sensitivity” is such a smooth diplomatic word that it usually hides a plethora of other issues and emotions. But here in diplomatic speak is an assertion that the Canadians are running scared about the ecological cost of their dirty fuel.

They are also concerned, warns the dispatch, about “the implications for Canada of your energetic calls to develop renewable energies and reduce our reliance on imported oil.”

The dispatch raises a number of issues. Notably it is only through the hard campaigning by  environmental and indigenous groups that the issue of the ecological and climate impact of the tar sands has gone from a non-issue to a major diplomatic issue in a number of years. They should be congratulated.

Moreover, as Friends of the Earth point out, “the language in the cable contradicts recent statements by U.S. State Department officials, including Secretary of State Hillary Clinton, that underplay the environmental impacts of tar sands oil while defending a proposed pipeline that would bring the extremely polluting oil from Canada to the U.S.”

Marcie Keever, legal director at Friends of the Earth, argues “It appears as though the State Department sought to deceive the American public about the environmental impacts of tar sands oil in conducting its draft Environmental Impact Statement on the Keystone XL pipeline. The department is required by law to fully evaluate potential environmental impacts, including the extreme levels of pollution produced by tar sands oil.”

And this is what Wikileaks does. It shows us when our political leaders are lying to the people.

It peels away the lies that politicians tell us, so we can know the truth.

No wonder they are scared.

No wonder they want to stop the leaks.