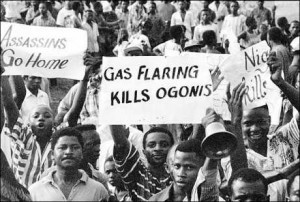 To mark the 15th Anniversary of the execution of Nigerian activist Ken Saro-Wiwa, we are exposing the public relations tactics that Shell employed to counter criticism of its operations in the country.

The evidence is contained in documents collected for the landmark trial last year of Wiwa versus Shell, but they were never made public as the case was settled out of court.

At the time of Saro-Wiwa’s death, Shell was under intense public scrutiny for colluding with the military regime and for not doing enough to stop his execution. It was also under pressure for its disastrous environmental impact, chiefly routine oil spills and gas flaring.

The company’s “most confidential” Crisis Management Strategy and Plan was finalised by senior Shell executives at a secret meeting in Ascot in January 1996, two months after Saro-Wiwa’s murder.

Instead of dealing with the causes of the problems, the Crisis Plan is focused on “The Message”, on public relations issues only. Phil Watts, who would later become Shell Chairman, emphasised that everyone must “sing to the same ‘hymn sheet’”.

Just like British Labour party years later, he talked about rebranding the company the “New Shell”. Getting “the style, tone, content and timing right” was an essential challenge to communicate more effectively while “reflecting greater humanity”.

Watts warned his fellow executives of “the importance of not allowing this most confidential document to fall in the wrong hands “.

The document added: “under no circumstances should it be reproduced, either within your organisation or to the outside world”.

The company would “Prepare a game plan for those NGOs considered key” and emphasised the need to “work with [and] sway ‘middle of the road’ activists”.

Others who offered the “possibility of beginning to build trust and understanding” included Pax Christi, Amnesty International and Human Rights Watch. Differentiating the interest groups into friends and foes, Amnesty was singled out as one NGO to approach for a dialogue.

In order to “achieve mutual understanding” Watts proposed to “share the dilemma” of the Group’s position on human rights and political involvement.

He also suggested “to organise a workshop with outside specialists (Amnesty International, academics, churches, etc) on boundaries of acceptable/desirable corporate behaviour.”

This new evidence reveals that Shell’s cooperation with Amnesty – that would last a decade – was a part of a plan to seek “third party endorsement” for its operations in Nigeria. Getting third parties to endorse you is another classic PR tactic that Shell employed.

The company wanted to target children with their propaganda but realised that “it would not be possible for Shell to produce branded materials” which could be used in school curricula.

So Shell suggested seeking a blue-chip partner such as the Royal Geographical Survey to “produce and distribute generic material” instead.

Shell also focussed on the press, complaining that the media always reported the position of pressure groups, and not the oil giant’s perspective.  It wanted to generate media coverage showing “‘the other version’ of events/ issues”.

It identified which media would be targeted, with “stable relationships” established with the Financial Times, Daily Telegraph, The Times, and the Independent.

The BBC was one of the organisations singled out by Shell’s PR department. One of the documents reveal that “relationships are underdeveloped” with the BBC World Service.

It continues: “We will identify and cultivate important editorial and senior management staff through a contact programme.” In particular they wanted to “build a relationship” with journalist Hilary Andersson, who had recently become the BBC’s Lagos correspondent, as well as “any of her known contacts in the divisions”.

The documents also noted that “showing progress with the ‘greening of Shell Nigeria'” was “strategically critical” after Saro-Wiwa’s death.

Although elsewhere, the documents acknowledge that the strategy may not be seen as genuine. “Our present communications strategy could be construed as green imagery” the authors wrote.

To improve its green image, the company had to counter accusations of “environmental devastation”, so Shell planned to produce a video “to publicise successes” and “to turn the negative tide”. The most important topic to be included in the film was “oil spills generally, focusing on sabotage.”

This would have had the effect of playing up the impact of illegal activity in causing oil spill pollution in the Delta, but in another document, the head of Shell Nigeria, N A Achebe, had acknowledged internally that “the majority of incidents arise from operational failures”.

The documents even reveal that Shell discussed whether it should stay in the country in the wake of Saro-Wiwa’s death.

One scenario was called “milking the cow”, whereas the “pull-out” scenario was seen as “giving in” or “caving in” which would set a “very negative precedent for the group”. Another reason for not leaving was that “issues of liability will not disappear even with a total withdrawal.”

Those issues of liability have not gone away. Shell is now being sued in the Netherlands for environmental damage in Nigeria.

A version of this article appeared in the Guardian newspaper this morning.