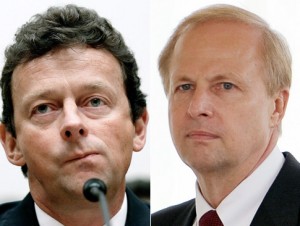 The details are still being worked out. The BP Board meets this afternoon.

But if the press reports are anything to go by, the company’s embattled CEO, Tony Hayward will walk away with anything from at least £11 million to £12 million plus. That’s about $18.5 million.

And that’s the low estimate. The huge amount is likely to add insult to injury to many American politicians, who see Hayward’s gaffe-prone response to the oil spill as an outrage.

Many of these gaffe’s have been detailed on this blog like this quip that the environmental impact would be “very, very modest” and “I want my life back”.

Of course, Hayward did not personally cause the accident, but it happened on his watch. This is the man who was supposedly meant to bring safety to the fore on that watch.

This is man who came in after the dark chaotic days of Lord Browne whose own tenure oversaw the Texas refinery fire and spills on the North Slope.

Hayward’s ship was meant to be one of “silent runnings” but it ended in a loud and very public ecological and human disaster.

And in that sense, many people will see Hayward’s golden handshake and pension pot as a reward for failure.

It will certainly outrage many in America further – especially the businesses across the Gulf that are struggling to pay the bills, and keep their businesses afloat.

But BP will try and appease that anger by appointing  the company’s first no-British CEO, Bob Dudley.

Dudley grew up in Mississippi and so the fact that the disaster happened in his backyard is meant to be some kind of comfort to an American public desperate for the disaster to end.

The move also reflects how important America is to BP:  About one-third of the company’s oil and gas wells, refineries and other business interests are in the US,  and 40 percent of its shareholders are Americans.

But this disaster will impact BP and the region for years to come. The company’s finances are not going to look pretty. BP is forecast to unveil the worst quarterly loss in British corporate history tomorrow, which could rise to $25 billion.

And as the NYT says: “The move would also be a recognition by the board that even though the oil has stopped spewing into the gulf, dealing with the consequences of the Deepwater Horizon accident — from tens of billions of dollars in claims to possible criminal charges and new regulations on offshore drilling — is likely to dominate the company’s agenda for years.”

But American shareholders may no longer be investing in “BP”. One thing being mooted is that the company changes the name of its American operations back to Amoco, the company Dudley once headed.

Changing your name is a tried and tested response to disasters.

Remembered how Exxon renamed the Exxon Valdez to the Exxon Mediterranean.  But that was just one tanker, this is a whole company…