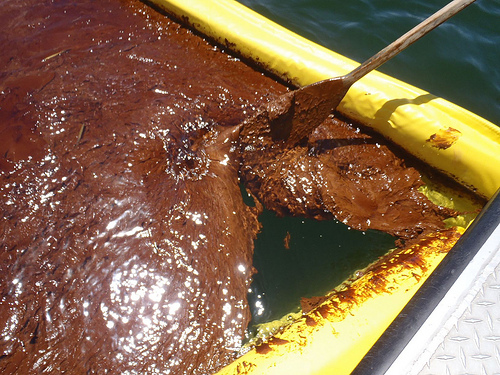 We all know that criminals like to cover their tracks. And BP is no different.

Jeanne Pascal, who worked 18 years as a Seattle-based attorney with the U.S. Environmental Protection Agency told the paper: “I have to conclude that there comes a point in time where we say enough is enough. Because BP has definitely turned into a major serial environmental criminal.”

Pascal pointed to three BP environmental convictions dating back to 2000, including two in Alaska and the 2005 the Texas refinery fire.

Then of course there is BP’s latest environmental disaster which has outraged Pascal too: “I think the people involved in what’s happened in the Gulf need to spend a good time in jail and think about it,” she said.

But one way this serial environmental criminal is trying to get out of jail is manipulating the evidence:

In Planet BP, a BP online, in-house magazine there is a parallel reality to the one that everyone else sees in the Gulf. “There is no reason to hate BP,” one local seafood entrepreneur is quoted as saying.

Far from destroying the local tourism due to blackened beaches and negative publicity: “Much of the region’s [nonfishing boat] businesses — particularly the hotels — have been prospering because so many people have come here from BP and other oil emergency response teams”.

One tourist official even says “BP has always been a very great partner of ours here…We have always valued the business that BP sent us.”

The trouble for BP is that often covering up the evidence is seen as just as bad as the original crime.

But then on Planet BP there is probably no spill at all.