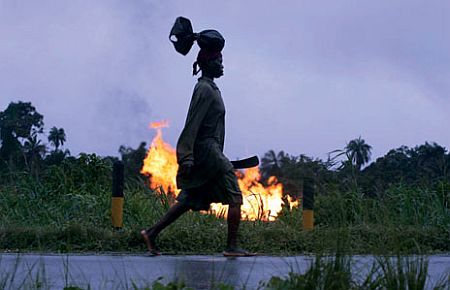 The showdown between Argentina and Britain over the Falklands is not the only row brewing on the international oil scene.

A bitter battle is brewing between oil giants such as Shell and Chevron and the Nigerian government over proposed reforms of the oil and gas sector.

The oil companies are threatening that up to $50 billion of investment could be undermined if the reforms go ahead.

Despite this, Nigeria’s acting President Goodluck Jonathan said earlier this week he remains committed to overhauling the oil industry so that it better serves the country’s national interest.

Analysts are saying that the proposals could radically reduce the profits of the international oil companies like Shell that have traditionally had an extremely close and cosy relationship with the government.

But those cosy days could be drawing to an end.

For years, lawyers have been working to finalise the country’s Petroleum Industry Bill (PIB), that would rewrite Nigeria’s decades-old relationship with the international oil companies  such as Shell, Exxon Mobil and Chevron.

Acting President Jonathan, who assumed full executive powers only two weeks ago, has said ensuring the bill passed quickly was one of his top priorities.

“Oil must be an agent for good and development not violence, war and impoverishment,” Jonathan said at an oil and gas conference in Abuja, Nigeria’s capital. “Our goal is to ensure that the benefits of petroleum be enjoyed and seen to be enjoyed by all Nigerians.”

He added “I want to reassure Nigerians and our foreign partners of our unwavering commitment to pursuing the reform in this sector with an eye on our national interest primarily and also in meeting the market demand for energy security”.

The international oil companies like Shell and Chevron are not taking the proposed reforms lightly and are raising the stakes.

Shell argues that oil industry reforms could drive away a whopping $50 billion of investment. “The PIB threatens to make a bad situation worse … If passed in its current form it will take years to correct its mistakes,” Shell’s out-going Executive Vice President for sub-Saharan Africa, Ann Pickard, told the industry conference in Abuja.

Chevron too is not happy. Andrew Fawthrop, who heads Chevron’s Nigerian operations has also warned the government: “We have to work closely together or billions of dollars will end up going elsewhere.”

The problem for Shell and Chevron is that they know that even if they pull out investment another company – either Nigerian or Chinese – will take their place.

And that will hurt them financially even more.