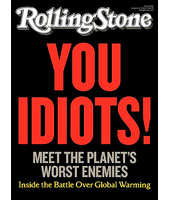 As promised from yesterday, here are the top dozen Climate Killers from Rolling Stones list.

According to the magazine, “the polluters and deniers are aiding Big Oil and Big Coal’s campaign to block progress on global warming”.

I am sure you won’t agree with everyone on the list (as I don’t) so here goes:

Many would be surprised that America’s best known advisor takes the number one spot, but Buffet has “been blasting the president’s push to curb global warming — using the same lying points promoted by far-right Republicans”.

But that is not why he is nominated. “In recent months,” Rolling Stone points out Buffet has “invested billions in carbon-polluting industries, seeking to cash in as the world burns.”

Buffet is heavily investing in Exxon and  recently invested in the Burlington Northern Santa Fe railroad for $26 billion, the US’s top hauler of coal. AS the magazine points out: “As a savvy investor, Buffett would only buy a coal-shipping railroad if he felt certain that Congress will fail to crack down on climate pollution.

Many might wander what the media mogul is doing at number two, but since 2007 when Murdoch said climate change “poses clear, catastrophic threats,” Murdoch and his media operations “have become the nation’s leading source of disinformation about climate change.”

No surprises here as “T-Rex” Tillerson the CEO  of Exxon Mobil is also next, nominated for its campaign to defeat climate legislation, which Tillerson claims will “cap economic growth,” and continuing to fund the climate sceptics.

Those not up to speed with domestic US politics may not know Landrieu, but she boasts of being “the most fervent pro-drilling Democrat in the Senate” — has assured oil interests that she’ll be “putting the brakes” on current efforts to cap carbon pollution. Enough said.

Morano is a rapidly rising sceptic, who used to work for Sen. James “Global Warming is a Hoax” Inhofe. He left Congress last year to set up shop as what Rolling Stone calls “the Matt Drudge of climate denial” by running a website called Climate Depot. “He’s a central cell of the climate-denial machine,” says Kert Davies, research director for Greenpeace US, a person who knows more about the sceptics than most. “He’s been very effective in delaying action on this crisis.”

Absolutely no surprises here either, as Inhofe is the GOP’s loudest and most influential sceptic on climate change. The senator from Oklahoma calls global warming “the greatest hoax ever perpetrated on the American people,” insists that carbon dioxide is not “a real pollutant,” and doesn’t worry about rising sea levels, because, if all else fails, “God’s still up there.”

Ratcliffe may not be a household name like Inhofe but he heads America’s second-dirtiest electric utility, which has assembled an army of 63 lobbyists — almost twice as many as any other company — to defeat climate legislation.

Its about time the dirty lobbying efforts by the coal lobby got a mention, and where better to start than the former House majority leader who now uses his considerable political clout as a lobbyist for Peabody Energy, the world’s largest private-sector coal company. Gephardt is probably the most influential clean coal lobbyist on the Hill.

Another media man makes the grade, this time a pundit. Will has “become a one-man front for corporate-funded “science” that denies the existence of global warming” argues Rolling Stone.

As President of the U.S. Chamber of Commerce, Donohue is the de facto chief of American business and industry. The USCC is a lobbying powerhouse, spending $65 million — three times more than ExxonMobil — mounting a campaign to block Congress from placing limits on carbon pollution in the first nine months of last year.

Many leading companies have resigned for the Chamber in disgust at its anti-climate stance.

Another coal baron makes the list and another unabashed denier who insists that climate change is “nothing but ‘a hoax and a Ponzi scheme.’ His fortune, argues Rolling Stone, “depends on such lies: Massey Energy, the nation’s fourth-largest coal-mining operation, unearths more than 40 million tons of the fossil fuel each year — often by blowing the tops off of Appalachian mountains.”

The rest of the list is good old long-term climate sceptic, Fred Singer, Republican John Mccain who has flipped his views on global warming recently, another Republic denier Rep. Joe Barton and the right-wing Koch brothers who have funded much of climate denial through funding think tanks.

An impressive bunch – there are many of these I totally agree with and some who maybe would not have made my top dozen.

The list is also very US-centric. So any other candidates anyone?