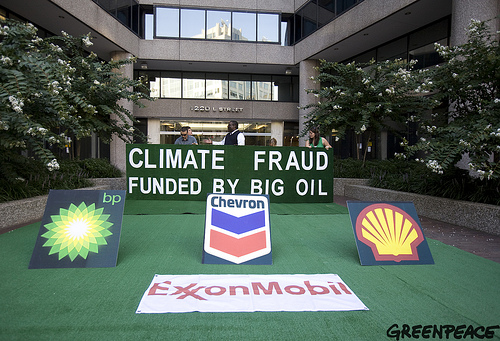 You really didn’t think that the oil industry would just roll over and give up without a fight on the US Waxman-Markey Climate Bill did you?

Just a couple of days ago I blogged about how many people had lobbied the climate bill. Although they are pouring in serious cash to defeat the Bill, its still above board lobbying.

What about the other dark arts of public relations? The oil industry has a history of playing dirty and using a whole array of perverse persuasion tactics.

For years, it has secretly funded scientists and think tanks that deny climate change. For years it has funded green-sounding front corporate groups  – known as astroturf campaigning.

So the Global Climate Coalition was not a coalition of concerned citizens on climate, but an oil company front organisation set up to fight global warming. The Citizens for the Environment was in fact no such thing, but a bunch of businessmen fighting clean air legislation.

Central to any dirty oil campaigning is the American Petroleum Institute (API), the trade Association that would probably still deny climate change, even if the flood waters were lapping at its door and the concept of ice at the North Pole was a distant memory.

In fact if you see a public campaign group headed by the word “Citizen” all your alarm bells should go off.  And yesterday Greenpeace released an internal memo from the old die- hards at the API, detailing plans to launch a nationwide astroturf campaign: and the name of the campaign is called “Energy Citizen”.

You would have thought that the boys at the API could have come up with a slightly more original name.

But the memo outlines a plan to attack the US Climate legislation at public events scheduled for the next few weeks before the Senate returns to debate the issue in September.

In classic atroturf campaigning reminiscent of the Wise Use movement, the memo asks API’s member companies to recruit “employees, retirees, vendors and contractors” to attend “Energy Citizen” rallies in key areas in next couple of weeks.  The campaign plan places a special focus on 21 states picked by API for having “a significant industry presence” or “assets on the ground.”

Whilst the rallies want workers to provide  “a human face” to the oil-industry’s campaign on climate legislation, all the logistical support would be provided by the API, which was going to contract a “highly experienced events management company that has produced successful rallies for presidential campaigns, corporations and interest groups.”

The email – sent by Jack Gerard, the API’s CEO states that it is being partnered in rally campaign by its old allies: the U.S. Chamber of Commerce and the National Association of Manufacturers.

But as Greenpeace pointed out in its letter to Gerard, the goal of the PR campaign “runs contrary to several prominent API members’ public support for climate action, namely Shell, BP America, ConocoPhillips, General Electric and Siemens. These companies are all a part of the pro cap-and-trade U.S. Climate Action Partnership, which publicly supported the Waxman-Markey bill.”

How embarrassing for our friends at Shell and BP who are yet to publicly distance themselves from the campaign.

The memo closes with a Gerard writing that it is ‘for your eyes only’.

He writes: “Please treat this information as sensitive and ask those in your company to do so as well… we don’t want critics to know our game plan.”

Trouble is for the API it is game, set and match to Greenpeace on this one.