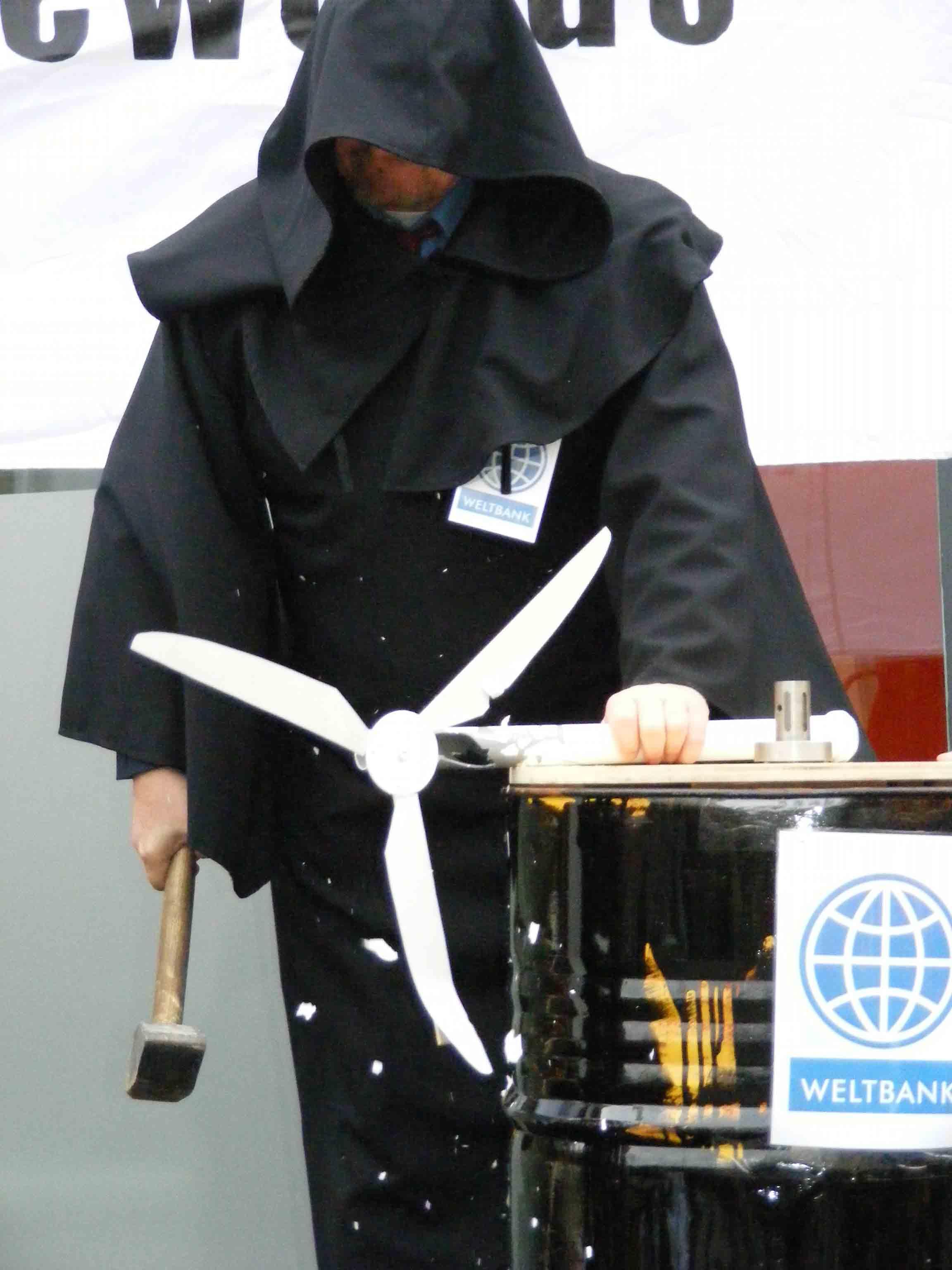 Relying exclusively on the World Bank’s own figures, a new analysis shows World Bank Group lending to coal, oil and gas is up 94% from 2007, reaching over $3 billion.  Coal lending alone has increased an astonishing 256% in the last year.

This is the same World Bank that would like to lead – and control the finances of – global efforts to fight climate change.

By comparison, the Bank reported that renewable energy and energy efficiency lending is up 87%, with the vast majority going to support large hydropower projects and supply-side energy efficiency.  Only $476 million went this year to support “new renewables”.   That represents only a 13% increase over last year’s $421 million, according to the Bank’s own numbers.

The breakdown of ‘renewables’ lending from the Bank is the following:

Large hydropower is a large portion of the renewables numbers and is up substantially from last year, according to the Bank’s own numbers – $751 million to $1.007 billion. Large hydropower projects are bad news for the environment, disrupting river ecosystems and water flows. They are often bad for people, as in many cases dams force relocation of populations. On top of this, large hydropower is bad news for the climate, if you consider greenhouse gas emissions from the reservoirs, which can be quite large.

Energy efficiency lending is up substantially over last year – $262 million to 1.192 billion. The Bank’s definition of energy efficiency includes both supply and demand side – so a lot of these loans on the supply side are likely retrofits of hydropower and coal plants. These sorts of supply side changes are not necessarily a bad thing, although they prolong fundamentally dirty or harmful energy sources. Scarce funding resources would be better used to encourage and promote fundamental changes in energy pathways and energy access in the face of climate change.

Demand-side or end-use energy efficiency is certainly a good thing, as it actually lowers consumption, but it’s still not facilitating a change from dirty to clean energy *sources*. And arguably, energy efficiency is quite cost effective, so it’s something that the Bank should be doing all the time anyway – and should have started long ago, not something that the institution should be able to brag about incrementally increasing.

So, in summary, according to the Bank, the “new” renewables lending (wind, solar, biomass, geothermal, and hydropower projects that will produce up to 10 MW per facility) has increased only from $421 million to $476 million from last fiscal year – up only 13 percent, not 87 percent.

It’s also important to note that these numbers include Global Environmental Facility (GEF) projects  – $90 million – in the new renewables category. The Bank always includes these numbers in their renewable energy lending figures, but the GEF is actually a different institution. Likewise, the Bank includes carbon finance numbers – another $104 million. Although they are housed at the Bank, the carbon finance funds are actually different funding streams set up independently from the Bank’s own funding. This would bring the actual World Bank Group funding down to $280 million.

Providing $280 million a year in renewable energy will not get developing countries where they go in terms of shifting to a clean energy supply or effectively combat climate change, particularly when compared to the significant increases in fossil fuel lending at the Bank.

Finally, an independent analysis done by the Bank Information Center suggests that if you exclude large hydropower projects and efficiency, World Bank Group funding for renewables in 2008 actually dropped by 42% from 2007.

From 1997-2007, according to the World Wildlife Fund-UK, the World Bank has financed 26 gigatons of carbon dioxide emissions – about 45 times the annual emissions of the UK.

The above was excerpted from Dirty Is the New Clean, co-published by Oil Change International, the Institute for Policy Studies, Friends of the Earth, and Campagna per la Riforma della Banca Mondiale.