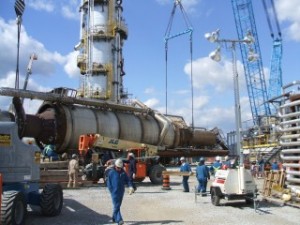 Happy World Environment Day! Not so in America, though. It may be the most polluting and dirty oil on the planet, but American refiners are tripping over themselves to make investments to dramatically increase imports from Alberta’s oil sands.

Figures released yesterday show that the oil industry is spending about $53 billion to expand or modify refineries in order to exploit oil sands.

U.S. refineries are planning to expand their capacity by 1.6 million barrels a day, and some two-thirds of that is designated to handle oil sands production, according to data from the U.S. Environmental Protection Agency.

As well, refiners are planning to convert 800,000 barrels a day of current capacity from conventional crude to handle the Alberta imports, the EPA figures show.

“It is hard to imagine what else it is that the U.S. oil industry could do to go backwards further and faster than to rely on Canadian tar sands or similar resources in the United States,” argues Eric Schaeffer, director of the Environmental Integrity Project. “Not only would this mean significantly more pollution over all, but it would substantially boost the greenhouse gas emissions linked to global warming.”