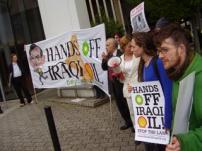 Campaigners from “Hands Off Iraqi Oil” held a demonstration outside the Shell AGM in London yesterday highlighting the key role Shell has “played in preparing the ground for the rip off of Iraqi oil”.

They were joined by a ‘Hands On Iraqi Oil’ executive who read a statement including: “From our offices in London, Washington, Paris and Rome, the carnage of Fallujah is a business opportunity. It doesn’t matter if we don’t actually set foot in the country for years – our stock prices will still shoot up as soon as we sign those contracts. Iraq’s danger is our gain”.

A letter in The Guardian yesterday from Hands Off Iraqi Oil stated that “Iraq’s future is being stolen. Today, as Shell holds its AGM in London and the Netherlands, action should be taken to stop this theft”.