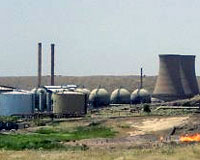 Iraq’s hugely controversial oil law edged closer to approval after Kurds said some key issues had now been resolved between them and Baghdad.

“Some of the issues in debate between the Kurdish regional government and the federal government in Baghdad were solved recently,” said Fauad Hussain, the head of the presidency board in Kurdistan.

“The Kurdish regional government approved the submission of the oil draft law to parliament” he said, but added: “The whole issue is still under discussions and it’s only a draft law.”

“The Kurds agreed on the key points which clarify the annexes of the oil law and the issue of the way that regions can manage oil resources all over the country, including the Kurdish region,” he continued.

Barzani met Iraqi President Jalal Talabani, who is also a Kurd, and U.S. Ambassador Zalmay Khalilzad on Saturday. “We agreed on the draft of the law but still there are some articles under debate with the central government,” Barzani said at a joint news conference with Talabani.

Reuters reported U.S. embassy spokesman John Roberts welcoming the comments by the two Kurdish leaders as indicating “good progress”. “This is an encouraging development,” he said. “It represents a move forward in terms of the negotiation process and we welcome any movement toward agreement.”

But as I have blogged elsewhere it might mean a move forward in terms of foreign oil companies getting their hands on Iraq’s oil. This can only be a disaster for the Iraqi people.